If the history of the markets teaches us anything, it is that they are constantly in flux. Conditions change and return on assets vary. When this happens, investors have two choices: they can let their portfolios drift, or they can try to correct its course.

Left to their own devices, most investors choose to drift because they prefer the status quo. But by doing nothing, the weights of outperforming assets rise and weights of underperforming assets shrink. When asset allocation changes, so do risk. Therefore, investors who want to maintain their risk-return profile will opt to rebalance their portfolios.

There many different ways to rebalance a portfolio. Here they are, listed here in the order of most inflexible, to the most flexible.

Portfolios are reset to their target allocations on a fixed time interval. This can be every week, month, quarter, or year. Assets that are overweight are sold to purchase underweighted assets until the portfolio reaches its target allocation.

Rebalances are triggered when certain assets deviate away from their target by more than the accepted range i.e. 5% or 10%.

This is the same as threshold rebalancing, except that asset allocations are rebalanced back to the maximum threshold instead of the target percentage. I.e. the target for asset A is 20%, it spikes to 28%, so then it is rebalanced to 25%.

Again, this is very similar to threshold rebalancing except that the thresholds for rebalancing are set according to each asset’s expected volatility. The more volatile the asset, the wider the rebalancing threshold.

Portfolios are rebalanced based on human judgement.

When Does Rebalancing Actually Improve Returns? 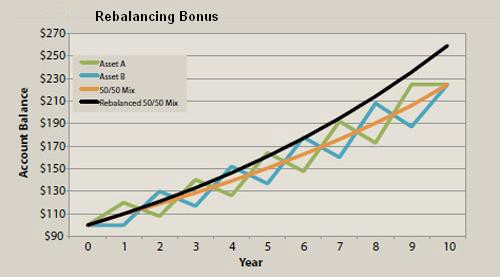 The ideal environment for rebalancing

Bernstein coined the term “rebalancing bonus” in a titular piece published in 1996. In the article, Bernstein postulated that rebalanced portfolios can often capture excess returns compared to portfolios that were left alone.

His literature was very influential and sparked a great deal of analysis on the topic by the likes of Sigma Investing, SmithBarney Consulting Group, Morgan Stanley, and Vanguard. It is generally accepted that rebalancing will outperform a drifting portfolio given these conditions:

Returns across different asset classes need to be similar in order for rebalancing to be effective. Otherwise, if one asset’s growth is much lower, each rebalancing would push money from the winning asset into the losing one.

Lower correlation causes the return on assets to offset each other, thereby reducing overall volatility. This accelerates the compounding of returns, and boosts portfolio values over time. The higher the correlation, the smaller the difference of returns across different asset classes must be in order for rebalancing to outperform holding.

High variances lead to certain time periods where certain asset classes will significantly outperform the portfolio and other periods where the same assets will significantly underperform the portfolio. When outperforming, a rebalance will take profits by selling. When underperforming, a rebalance will trigger a buy at the lower price.

Mean-reversion happens on the same cycle that rebalancing takes place

When assets have mean-reverting tendencies, they are more likely to appreciate if they have underperformed in the past. During a rebalance, additional funds are invested in underperforming assets. As performance reverts back to the mean, overall returns increase.

The portfolio under consideration spanned a 30-year period between 1975–2004 and was made up of:

At first glance, the results show a significant gain to rebalancing across all time horizons. However, a closer look at the underlying data shows that two of the most important characteristics required for the ‘rebalancing bonus’ are satisfied.

The asset classes are generally uncorrelated. The mean rate of return across each asset class falls within a very narrow band (9% to 10.7%). The variances between individual asset classes are high (40% standard deviation for emerging markets.

To demonstrate an environment where rebalancing underperformed a drifting portfolio, Sigma Investing replaced emerging market exposure with REITs (real estate investment trust). During a 30 year window, REITs had an IRR of 15.2% and was the best-performing asset class by a wide margin. Remember, we said that in order for rebalancing to outperform, mean rates of return need to fall within a narrow band.

The table below shows a comparison of the two portfolios over 30 year period.

Vanguard evaluated the historical performance of rebalanced portfolio vs. a drifting portfolio over a 40 year period (1960–2003), assuming a 60/40 equity bond split. There were no taxes, and dividends were assumed to be reinvested. 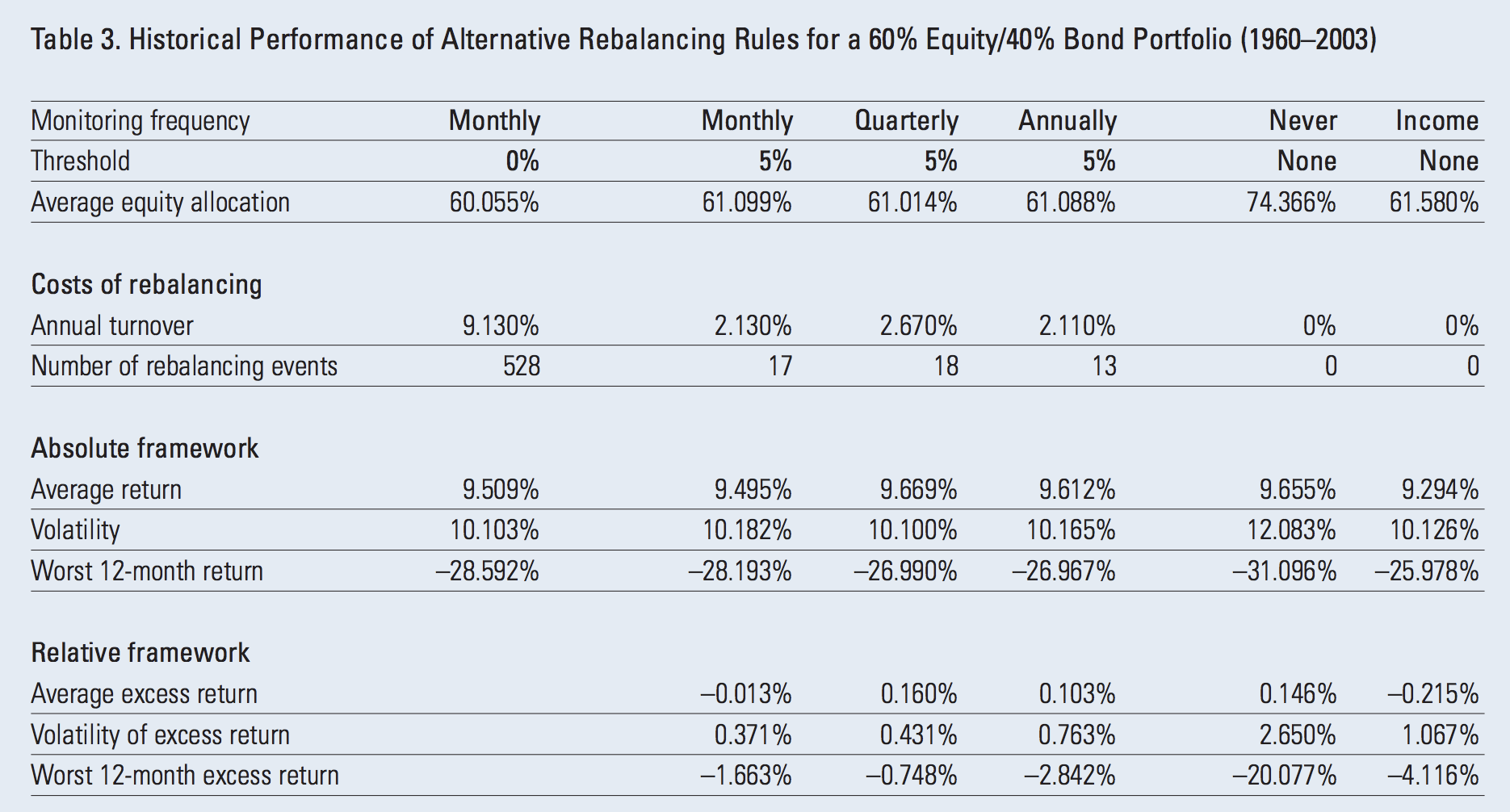 In the study, Vanguard also found sometimes rebalancing outperforms a drifting portfolio, and sometimes it didn’t.

When the drifting portfolio did outperform the rebalanced portfolios, it did so at the expense of taking on additional risk (highest volatility, and worst 12 month return).

Like we originally stated, returns between asset classes need to be uncorrelated and fall within a narrow band in order for rebalanced portfolios to outperform. In trending markets, this is typically not the case.

If an asset strongly outperforms for a sustained period, then rebalances will move funds away from the outperforming asset. Over a long time period, this will reduce a portfolio’s overall performance. As we saw, the performance of REITs between 1975–2004 was a good example of this.

The opposite of trending markets are mean-reverting markets. In such conditions, rebalancing can enhance portfolio returns by following the mantra of buy low, sell high. In 1987 and 1988, the stock market followed a pattern of mean reversion. Stock prices rallied through much of 1987, collapsed on October 19, then recovered in a back-and-forth pattern during 1988.

This is likely because the other characteristics of markets where rebalancing outperforms drifting were missed, namely: low or negative correlation, and narrow difference of returns between the two asset classes.

It is extremely difficult to predict whether markets will be trending or mean-regressing.

If investors can accurately predict market conditions ahead of time, then they can tactically rebalance to improve returns and reduce risk.

However, both practical and academic evidence shows that it is almost impossible to predict future market conditions consistently. This is the same reason, 95% of active traders fail to beat the market index over a 15-year period.

Rebalancing will generally reduce risk, but not always

That being said, rebalancing generally reduces volatility in both trending and mean-reverting markets.

Also, consider what happens when the risky asset underperforms, and the weight of the safe asset is reduced in order to purchase additional shares of the risky asset class.

What is the Optimal Rebalancing Period?

Now that we’ve made it to this point, readers should have an understanding that rebalancing does not always outperform drifting portfolios. It depends on market conditions that we cannot know ahead of time.

Similarly, there is no best optimal rebalancing frequency. In trending markets, the more frequent the portfolio rebalances, the worse average excess returns become. The opposite is true for mean-reverting markets where correlation is low between assets, and returns fall within a narrow band.

Bernstein did a case study of different rebalancing periods and found that there was no optimal period. This research is backed up by Vanguard’s Monte Carlo simulation of portfolio on a random-walk over a 40 year period.

While there is no definitive evidence that a single rebalancing strategy is best, we do know for sure that more frequent rebalances cost more due to:

In the past, we required human labour to trigger rebalances. But in the modern era, automation reduces the cost of labour. Many software solutions offer automatically rebalancing, including HodlBot.

Tax, is least understood of these three. What is negligible for a pension fund, could be self-defeating for an individual investor at a higher income bracket.

Depending on where you live, and how you invest (fund vs. holding the underlying assets yourself), rebalancing costs will vary.

Bernstein warns that the superiority of rebalancing as a long-term strategy only pertains to national and regional markets as a whole, and not among different industry groups.

Assets within industry groups tend to be correlated. They are also much more likely to trend in one-direction or another. Over the course of decades, entire industries shrivel while others boom.

Although national markets occasionally disappear through war or economic catastrophe, they are much less likely to do so when compared to industries that are being constantly remoulded and disrupted.

As an aside, I’m working on HodlBot. We offer a software service that allows investors to automatically index the cryptocurrency market. Our product rebalances every month, but don’t do it to capture excess returns. The HODL20 is a market index. We rebalance in order to accurately track the top 20 coins in the market. That’s it.

I am extremely sceptical of companies who claim rebalancing will reliably capture excess returns. In fact, I strongly warn against any business that makes this meretricious claim.

If you torture data enough, it will confess to anything.

Just because rebalancing outperforms in a one-time period, it does not mean it will in another. When you use rebalancing as an active trading strategy in order to make excess returns, know that you are actively betting that your prediction of future market conditions will hold.

Literature cited in this article:

There is a Rebalancing Bonus (False) — Retail Investor

What is the Best Rebalancing Period? 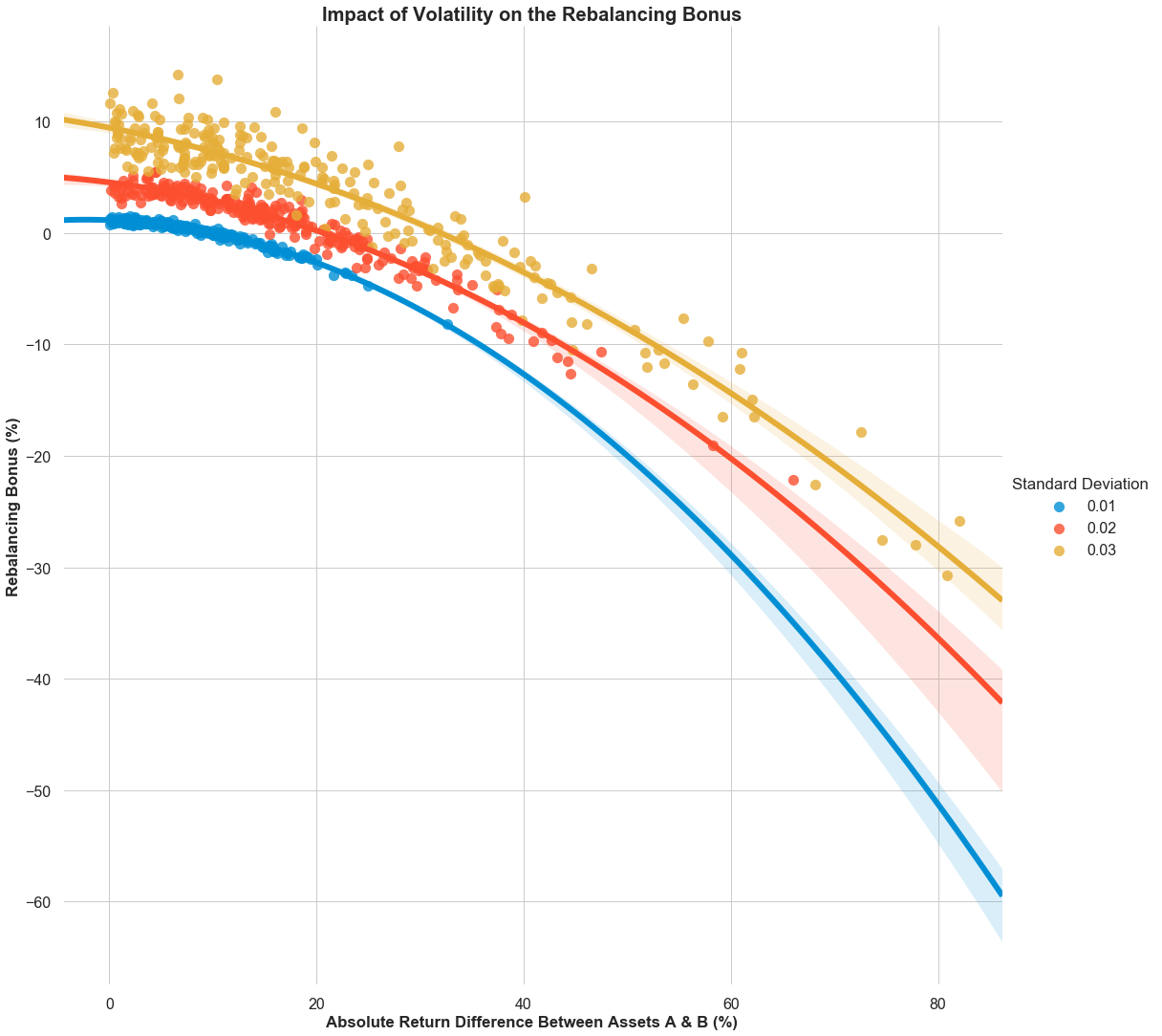 When Does Portfolio Rebalancing Improve Returns? 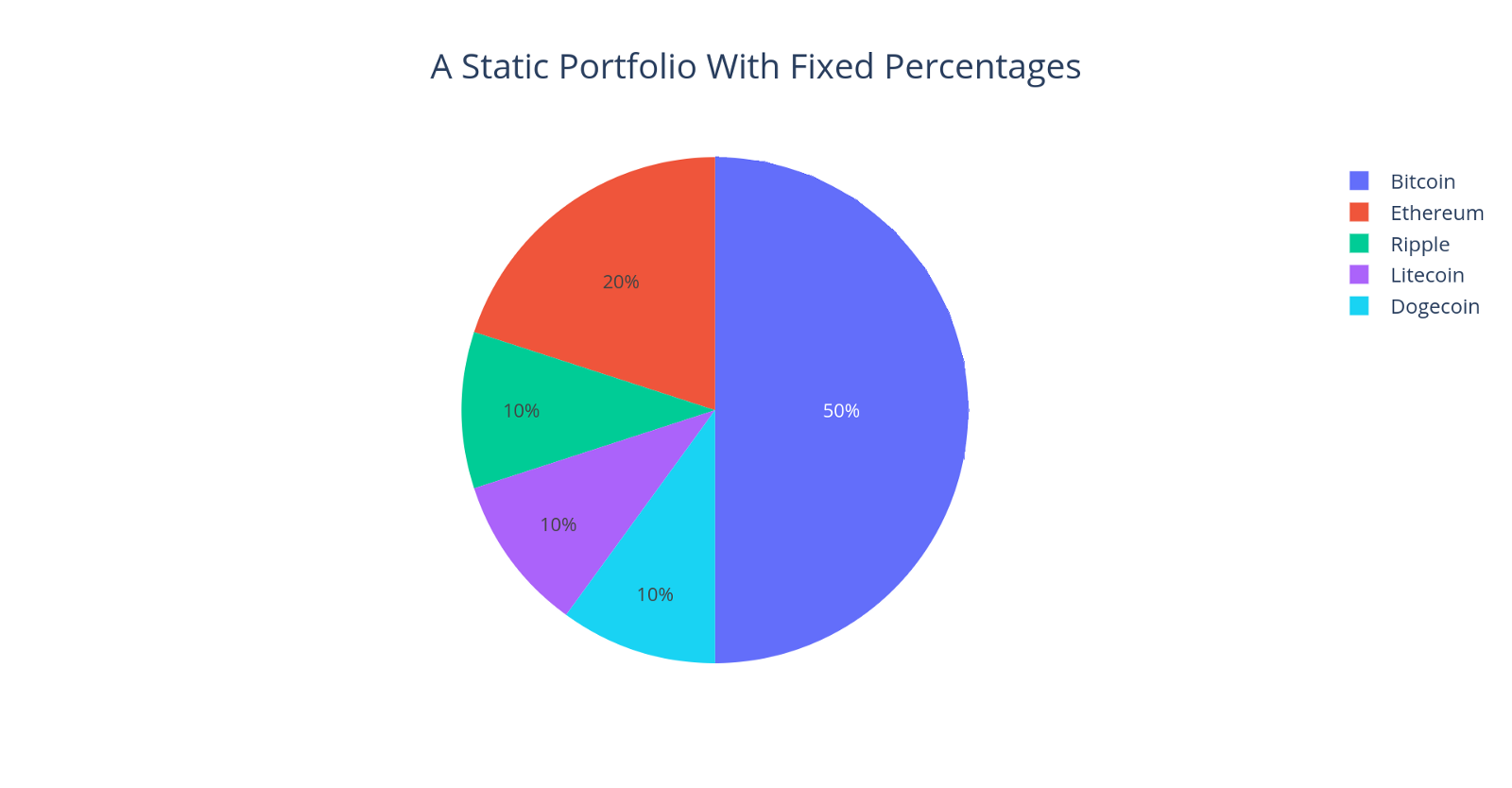 Should You Rebalance Your Cryptocurrency Portfolio?